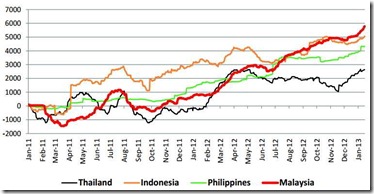 TRACKING MONEY FLOW (up to 18 Jan 2013)
• Global funds were net buyers of Asian equity for the ninthconsecutive week, on greater intensity. Based on preliminary data from our proxy markets, we estimate that the aggregate net INFLOW of foreign equity investment to the seven markets that we track (Korea, Taiwan, Thai, Malaysia, Indonesia, Philippines and India*) rose to +USD3.6b, compared with +USD3.0b the week before. The size of the inflow was the highest since mid-December, and the second highest in 17 weeks.
• India is hot! It consolidated its streak of surpluses, recording an inflow for 24 consecutive weeks. It was the highest beneficiary last week, hitting USD2.2b, its strongest since November 2010.
• Indeed, Asian Emerging Markets were clear winners last week, with Indonesia, Philippines, Thailand and Malaysia all recording strong inflow. Fund flow to Indonesia surged to its highest in 17 weeks,
coinciding with the strong gain in the Jakarta Composite Index. Philippines remained strongly on the radar screen of foreign investors, recording >USD450m inflow for the second week running.
• The surge of money flow to Emerging Asia came at the expense of Developed Asia as both Korea and Taiwan reported negative flow numbers. For the year until last Friday, the two markets were in the
negative territory in terms of money flow, in contrast to the USD3.7b that has made its way to India, Malaysia, Indonesia, Philippines and Thailand.