Fund Flow For The Week of Ended October 26

• Foreign investors remained net buyers of Malaysian equity in October amid heightened volatility on Wall Street. For a record 19th consecutive week, foreign purchase of Malaysian equity had been unrelentless. On a net basis, foreigninvestors BOUGHT +RM123.9m in a four-day week, compared with +RM488.5m the week before. In the preceding 18 weeks, the average purchase was +RM382m per week (see chart below).

below: Weekly Net Flow of Foreign Funds into Malaysian Equity (click to enlarge) 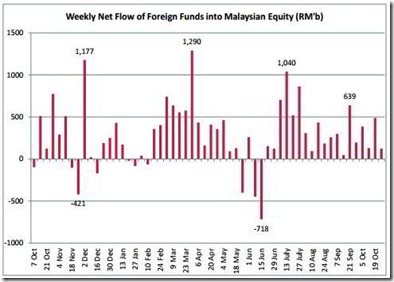 • For the year until last Friday , the cumulative net infl ow of foreign fund to Malaysian equity rose to +RM12.8b. It was 6.7 times the amount of +RM1.9b recorded for the entire 2011. Since Jan 2010, cumulative net purchase of Bursa-listed shares by foreigners amounted to RM29.9b.

• Foreign funds sold on Monday and Tuesday, subsequent to the heavy selloff on Wall Street on Friday October 19. However, the selling was well absorbed by locals, surprisingly by the retailers. Regardless, the two days of selling last week indicate that foreign funds are getting a bit edgy of late, although they resumed buying on Wednesday and Thursday. The rate of participation (gross purchase and sale) also dropped to RM657.2m, compared with RM1060.06m the week before.

• Retailers surprisingly made a comeback, although purchases were at a marginal RM6.8m. They bought on Monday and Tuesday, probably bargain-hunting on ASTRO which fell below the IPO price. Participation rate rose RM798.8m, the highest in 13 weeks.