MALAYSIA
• Foreign investors remained net buyer of Malaysian equity in the post-Budget week. It was the 16th consecutive week of net purchase, the longest stretch in our record. On a net basis,  foreigninvestors BOUGHT +RM386.5m, compared with +RM195.8m the week before. In the preceding 15 weeks, the average purchase was +RM390.6m per week (see chart below).
• For the year until last Friday , the cumulative net infl ow of foreign fund to Malaysian equity rose to +RM12.0b. It was more than 6 times the amount of +RM1.9b recorded for the entire 2011. Since Jan 2010, cumulative net purchase of Bursa-listed shares by foreigners amounted to RM29.2b.
• Foreign funds were net buyers during all fi ve trading days last week. They were net buyers for 16 consecutive days until last Friday. However, the rate of participation (gross purchase and sale) deteriorated further to RM642.8m, which we deem as “low” (<RM750m). It was the lowest in fi ve weeks.
• Locals remained net sellers. Retailers offl oaded -RM127.1m, higher compared with -RM61.1m the week before. Participation rate fell further to RM564.4m, the lowest since the middle of June.
• Local  institutionssold moderately last week, clearing on a net basis, -RM259.4m, compared with -RM134.7m the week before. Daily average participation rate of local institutions remained elevated at RM1.61b. 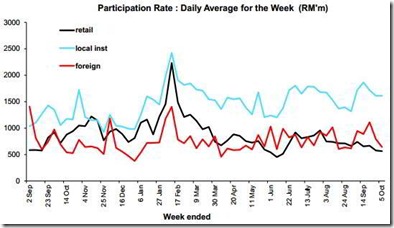 THE WEEK AHEAD - AUSPICIOUS START TO OCTOBER
• We wrote earlier that October had historically  been a rewarding month for the KLCI. So far it has not disappointed. Until last Friday, the KLCI and FBM70 had already gained 1.4% each in October.
• Along the way, the KLCI scaled new heights. It closed at an all-time high of 1661.47 on Thursday. On Friday, it surged to an intraday high of 1668.32 points before profi t-taking reigned and the index settled at 1660.23 points.
• We believe the KLCI can still register new highs next week in the absence of any disruption to global sentiment. A major market risk being played out currently is the fi scal cliff in the U.S, which is a real threat to the sustainability of its GDP growth. Meanwhile, crude oil price is also on a slight retracement and that also works against equity as the two are highly correlated.
• On the bright side, October had historically been benign for equity. In the last 10 years, the KLCI had gained an average of 3.4% in October. Even after eliminating the outliers, the average gain was 3.1%. Until Friday, the KLCI had already gained about 1.7% for October. If one were to apply historical benchmarks , the KLCI may edge close to the 1700 level. However MIDF has a year-end target of 1670 points

VOLATILITY IS HEALTHY
• Market volatility is currently at a healthy level and  should support the market momentum. It has been climbing (see chart) but is still way below the level that we deem as excessive.
• Plantation stocks turned volatile last week mainly on account of industry newsfl ow and the depressed price of CPO. There is a concern over
the spike in inventory as production surged (Jul-Oct is normally the peak output season) and demand slowed. We would be looking to accumulate Sime Darby and IJM Plantation. The discount of CPO price to soybean is rather wide at >30% currently. For the discount to narrow,
there is a greater likelihood for CPO price to rise rather than soybean price to fall. Technically, CPO price is now at a steep 16% discount to its 50-day moving average. It has to rebound at some point.
• Construction stocks should also attract attention as the sector’s GDP is expected to grow at double digit again in 2013, based on the recent Budget. We like IJM, Gamuda, WCT and Hock Seng Lee.