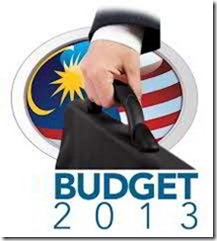 The things to watch are the Government’s budgetary discipline and debt level. This is given the “track record”, where actual spending – especially OE – has been exceeding the original budget due to sizeable Supplementary Budgets. Government debt is also edging towards the cap of 55% of GDP (2013E: 54.2%; 2012E: 53.7%).

As expected, laden with people-friendly and feel good measures ahead of the 13th General Election (as per our Budget 2013 Preview), which include:
1) repeat of Budget 2012’s cash handouts (i.e. BR1M, financial assistances to students)
2) measures to address the affordable housing issue;
3) more goodies for civil service e.g. bonus; pension revision;
4) financial assistances and initiatives to alleviate rising living cost and provide safetynets for target groups and
5) allocations to address other major issues raised by the public e.g. crime, education & training, public transport and rural infrastructure.

We estimated these measures accounted for at least MYR73.2b or 29.3% (including MYR37.6b subsidy allocation) of the overall Budget 2013.

Tax measures a mixed bag. As per our Budget 2013 Preview (18 Sep 2012), there were no Goods and Service Tax (GST) and “sin tax” hikes.
We also highlighted the probability of reviews in personal income tax rate and reliefs, which materialised via 1% cut on taxable income of between MYR2,501 and MYR50,000, and the increases in reliefs for children education. The big surprise was the second consecutive Budget of hike in real property gains tax (RPGT).

Oil & gas, capital markets, SMEs, education, agriculture and R&D activities are the major beneficiaries given the incentives and allocations for
1) investment in petroleum products’ refinery activities and LNG trading; 2) issuance of and transactions in AgroSukuk and retail bonds/sukuks as well as promotion of business trusts;
3) SME funds and financing schemes (at least RM3.7b worth versus around MYR5b in Budget 2012);
4) education & training (including pre-school and childcare services)
5) agriculture and food security, and
6) commercialization of R&D.