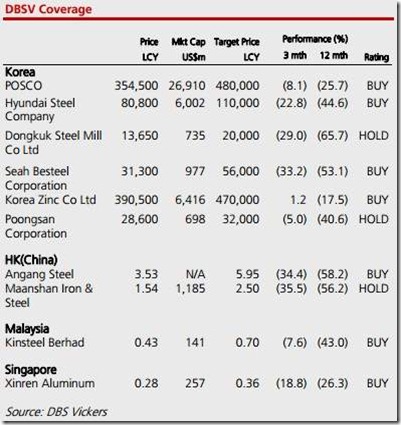 Steel and metal prices still falling; iron ore prices reach lows. Steel and metal prices started to slide in May and are still falling in July. Prices of HR coil in the export market had dropped to US$598/ton from US$630 in June. In China, HR coil prices have fallen by US$17 to US$590 over the past month. Prices of iron ore (63.5% Fe content Indian fines) have also plummeted by US$10 to US$126-128/ton CFR China over the last month. Meanwhile, steel mills in the US are attempting to raise selling prices by US$40/ton for August shipments, backed by demand growth.

Mixed 2Q12 results by country; weakening steel prices casting a shadow on 3Q12. We expect Korean and ASEAN steel players to register q-o-q improvements in 2Q12 results, but Chinese steel millers’ profits may remain depressed. At current steel prices, most Chinese steel mills should be loss-making in 3Q12. Also, regions where domestic prices had been stable so far, such as Korea, Japan and the US, will be threatened by falling prices in the export market. If raw material prices continue to fall, buyers may hold back orders for steel products on expectations of lower prices. This in turn will drive down prices of steel stocks.

Prices to bottom out in 4Q12 after China cuts production. We expect steel prices to bottom out by end 3Q12 or in 4Q12 led by production cuts coupled with improving demand (backed by the Chinese government’s monetary and fiscal stimulus measures). Recently, Chinese steel players announced that they would be reducing output in August for maintenance, but China needs to cut production substantially to match slowing demand and to offset destocking at the producer level.

Steel demand to pick up with award of MRT contracts ahead of schedule. We anticipate steel consumption to surge, underpinned by construction and infrastructure activity as projects are gradually doled out. The award of the MRT contracts was ahead of schedule - most of the large packages have been awarded. We estimate that 81% or RM16bn (37 out of 85 packages) of the Sungai Buloh-Kajang line have been awarded todate. Based on MRT Co.’s media release, pre-construction works have started in Jalan Bukit Bintang, where it will implement a traffic management plan for a month. Also, works have commenced at Viaduct 1 which is 5.4km long and covers the alignment of four MRT stations, and will start soon at the Sungai Buloh depot

Kinsteel to record profit in 2Q12 after turnaround in 1Q12. Kinsteel's earnings had been volatile over the last two years and there were quarters where it was loss-making. However, it finally turned around last quarter and we believe Kinsteel will be profitable ahead. Thiscould improve sentiment and interest towards the counter. We believe the stock prices could outperform when there is more visibility on its pelletising plant, which will be completed this year or in FY13.

Malaysia steel sector poised for re-rating. This would be led by the imminent pick up in construction activity. The sector is currently trading at below book (0.6x P/BV) because it had been plagued by weak sentiment as earnings remained unpredictable due to volatile raw material prices. However, sector valuation could re-rate with higher steel consumption,
like during the 1995-1997 upcycle. Then, the sector had traded at average of 1.6x P/BV when demand for long steel was boosted by mega projects such as the KLIA, Petronas twin towers, Putrajaya city, and LRT lines.