• In a turn of event, foreign investors BOUGHT back Malaysian stocks last week after massive selling the week before. On net basis,  foreign investors BOUGHT +RM153m compared with -RM718m sold the week before. There had been no distinct fund  fl ow pattern in the last five weeks
• For the year until last Friday, the cumulative net inflow of foreign fund to Malaysian equity inched up to +USD1.95b. It was still much higher compared with only +USD643m for the entire 2011. Since Jan 2010, cumulative net purchase of Bursa-listed shares by foreigners amounted to RM23.1b.
• In a reversed scenario compared with that in the preceding week, foreign investors were net buyers every trading day last week with the exception of Monday. They were consistent buyers reflecting cautious accumulation. For the week, participation rate declined 17% from the previous week. Foreign daily  average gross trade (purchases + sales) fell to RM823m compared with RM989m the week before. At RM823m, we would describe participation as moderate.
• Local retailers continued to be net sellers for the eighth consecutive weeks. Participation rate rose to RM715m, the highest in fi ve weeks, as retailers took advantage of institutional support to exit the market .
• Local  institutions engineered a support of the market last week, but still ended up relinquishing some of their equity position. Local funds bought RM4.3b gross for the week, but quickly sold down about the same amount to end the week in a negative net position of -RM67m. The week before, they mopped up RM753m. However, daily average participation rate of local institutions surged to RM1.72b, the highest in fifteen weeks. 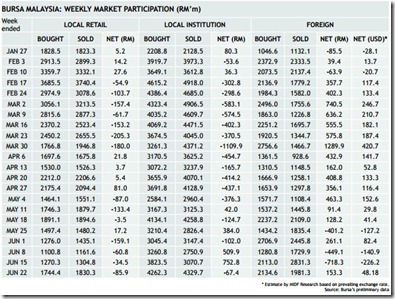