Still Robust Infow of Fund to Asia Despite Truncated Trading

MARKET SNAPSHOT
•  The  global rally in equity prices took a breather last week, as trading in Asia was disrupted by the Chinese New Year. Many markets were closed on Monday and Tuesday, while the markets in China and Taiwan were out for the entire week.
•  Wall Street had a mixed week as the corporate earnings reporting season began in earnest. The Dow Jones shed -0.5% while the  S&P500 maintained the momentum with a marginal 0.1% gain, keeping the index above the critical 1,300 level.
•  European markets had a generally better week than that in Wall Street. The DAX continued its strong rally gaining 1.7%. So far in 2012, the DAX has gained 10.4%, making it one of the best performing developed markets in the world. The FTSE and CAC closed the week hardly changed. 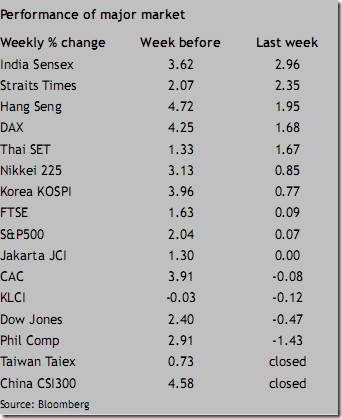 •  Asian markets had a mixed, but generally positive week as all eyes will be on the China and Taiwan markets as they re-open on Monday. The markets in Japan, India and Thailand were NOT closed for the New Year and these markets did rather well. India’s Sensex was the best performer in our ladder
with a gain of 3%, and is now the best performing in Asia this year with a gain of 11.5%. There was proft    taking    in    Manila    and    Jakarta.
•  The KLCI remained a noticeable laggard losing -0.12% last week. Year-to-date, the index has lost -0.6%, the only market among those that we track to be in the negative territory.

TRACKING MONEY FLOW
• Asian equity markets continued to draw global funds in a trading-shortened week. For the sixth consecutive week, and eight in the last nine, foreign funds were net purchasers of Asian stocks. This is based on the proxy markets that we track.  Last week, there was an aggregate net INFLOW of foreign equity investment amounted to USD2.3b to the seven markets that we track (Korea, Taiwan, Thai, Malaysia,   Indonesia,  Philippines    and India), for which fund  flow data is publicly available.

• Almost all  markets  recorded  positive  infow,  with the exception of Indonesia and Malaysia.  Considering that the trading week was shortened and Taiwan was still closed, the USD2.3b that came in is quite robust. There was a surge of portfolio capital to Thailand and Philippines — these two markets may surprise in the weeks ahead. 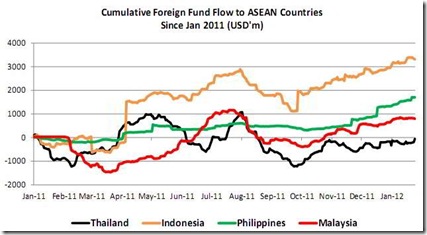 • The outfow of  Indonesia  andMalaysia may reflect rotational  play  among Emerging South East  Asian market. But in the bigger scheme of things, funds are currently more inclined to move to North Asian markets. Until last Friday, Korea had    recorded an infow  of  USD5.4b,  compared  with  an aggregate  of USD1.0b that moved to the TIPs + Malaysia markets.