Investment Highlights
•  We maintain our BUY call on Dialog Group Bhd with an unchanged fair value of RM3.04/share, based on our sum-
of-parts valuation. Our fair value implies an FY12F PE of 29x, which is above its three-year average of 17x but below its peak of 40x in 2007.
•  Dialog has signed a contract and an alliance agreement with its effectively 46%-owned Pengerang Independent Terminals Sdn Bhd (PITSB) to provide engineering, procurement, construction and commissioning (EPCC) works worth RM1.9bil for first phase of an independent deepwater petroleum terminal, which will have a capacity of 1.3mil cubic metres and six vessel berths, at Pengerang, Johor.
•  The first phase’s construction cost of RM1.9bil is  12% higher than the management’s earlier guidance of RM1.7bil but the schedule of completion has been extended from end-2013 to 2014. As such, we maintain FY12-FY13F earnings which already incorporate EPCC revenues of RM500mil-RM800mil.
•  We understand that the reclamation earthworks for the project will be awarded over the next two months. Recall that PITSB is a special-purpose vehicle which will be 90% owned by Pengerang Terminals Sdn Bhd (PTSB) and the balance 10% to be held by the Johor state. Dialog owns 51% of PTSB and VOPAK 49%.
•  The independent deepwater petroleum terminal will be developed on contiguous onshore and seabed land located between Tanjung Ayam and Tanjung Kapal in Pengerang.
•  The terminal will comprise a harbour port, jetty and other marine facilities with water depth up to 26 metres capable of handling Ultra Large Crude Carriers, Very Large Crude Carriers and other vessels, and with tankage facilities for the handling, storage, processing and distribution of crude oil, petroleum, petrochemicals and chemical products. 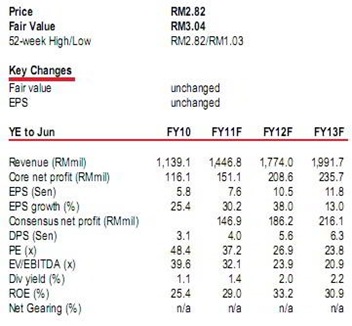 •  Dialog currently trades at a premium CY12F PE of 25x versus the oil & gas sector’s 15x. This stems from  the exciting Pengerang terminal prospects, along with the group’s defensive earnings profile, which registered a commendable 25% CAGR over the past five years.
•  Besides tank storage projects, there could be further excitement from the group potentially being involved in the Bentara/Balai marginal field development via an equity stake in a risk-sharing contract with Roc Oil. 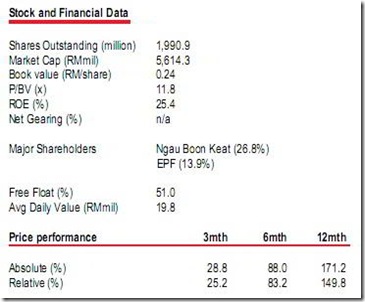