•  Offshore rig day rates in August this year have increased slightly in three of the four rig market segments tracked by ODS-Petrodata's monthly Offshore Rig Day Rate Index. The Gulf of Mexico jack-up, Northwest Europe Jack-up and mid-water depth semi-submersible day rate indices rose slightly while the deepwater slid slightly. Worldwide fleet utilisation
rate remains resilient at 77% currently.
•  The ODS-Petrodata Gulf of Mexico Jackup Day Rate Index increased to 219 despite low fleet utilisation of 54% currently amid regulatory  uncertainty in the aftermath of the Deepwater Horizon oil spill. The index was up due to two recent contract agreements but outlook remains uncertain due to the deepwater moratorium, which is effective until November this year.
•  The Northwest Europe jack up nudged up slightly while the Mid-Water Depth Semisubmersible Day Rate Index increased to 679 despite fleet utilization declined slightly to 82% (See Chart 1).
•  The ODS-Petrodata Deepwater Rig Day Rate Index ended its three month run of modest increases, falling slightly to 667 this month. While fleet utilization remains strong at almost 100%, but the uncertainty over GOM-based rigs being redeployed into other markets remains a concern. We note that most of the working rigs have already been locked into long-term service contracts with concessionaires.
•  While rig rates have remained relatively stable over the past two months since the US deepwater moratorium, GOM operators remain largely cautious on the new US safety regulations, not fully disclosed at this juncture.  Nevertheless, US regulators have signalled a more accommodative stance by indicating that the deepwater drilling ban in the US Gulf of Mexico (GOM) may be lifted ahead of its 30 November deadline.

•  We remain positive on the sector given the emerging signs of new domestic-centric jobs such as:
(a) RM4bil fabrication contracts for Malaysian shallow fields to be awarded in 2H
2010, (b) RM3bil Petronas LNG re-gasification plant in Melaka; (c) New maintenance and
hook-up commissioning services for existing offshore platforms, potentially worth RM3bil;
(d) Exxon-Mobil’s enhanced oil recovery investments worth over RM7bil for existing
fields; and (e) Revival of the RM2bil Sabah Oil & Gas Terminal project in Kimanis.

•  Given the re-acceleration in the country’s oil & gas capex up-cycle coupled with the proposed listing of MISC’s Malaysia Marine Heavy Engineering by end 2010, we maintain our OVERWEIGHT view on the sector with BUY calls on SapuraCrest Petroleum, Alam Maritim Resources, Kencana Petroleum, Wah Seong Corp, Tanjung Offshore, Dialog Group and Petronas Gas. Our top pick continues to be SapuraCrest given its huge lock-in order book of almost RM10bil, which should sustain earnings for the next three years. We maintain our SELL call in KNM Group given its poor earnings deliverance. 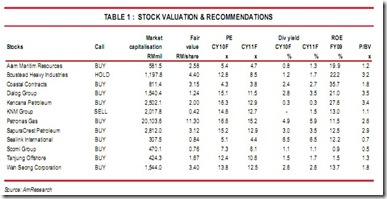