Maybank (RM7.50; Buy; Price Target: RM9.00; MAY MK)
Regaining its roar
•  Riding on domestic economic recovery; domestic deposit franchise is a plus
•  Indonesian operation should pick up from low base and low expectations
•  Upgrade to Buy, raised TP to RM9.00; laggard big cap relative to CIMB

Getting comfortable with improvements. Maybank is mostly a commercial banking franchise, which positions it as an economic recovery play, especially in consumer and business loans. It tops the deposit market with 22% share, with an inherent domestic deposit franchise advantage. We expect its loan portfolio to grow at 12-15% over FY10-12F compared to industry average of 8-9%, leveraging on its domestic franchise for consumer products, especially hire-purchase and mortgages, and Indonesia prospects. Over the medium term, there are low hanging fruits that Maybank could get right to reap ample upside. It is expected to upgrade its IT infrastructure and core banking systems within the next few years, which might allow Maybank to function seamlessly within its regional operations. It might also explore a capital management plan to enhance ROE.

Indonesia is next growth story. BII’s annualized latest 6-month loan book grew 23%. If sustainable, it would be positive for BII and Maybank. There had been sharp improvements at WOM Financing, which had caused severe provisioning issues at BII prior to the acquisition.

Management targets RM450-500m annual profit from BII within three years, which means BII’s profit contribution to Maybank would rise to 12% from 7% currently.

Upgrade to Buy, cheap big cap laggard. We raised our TP to RM9.00 (from RM7.30) based on the Gordon Growth Model as we roll our numbers forward to CY11. If Maybank is able to rekindle its historical ROEs of 15-18%, it deserves a re-rating to pre-BII levels. Our 15% ROE forecast by FY12 imputes upside from BII, non-interest income, and stronger loan growth. We raised FY10-12F earnings by 1%-8%. Maybank is a laggard with low foreign shareholding (11%) vs. CIMB (40%) and Public Bank (26%). 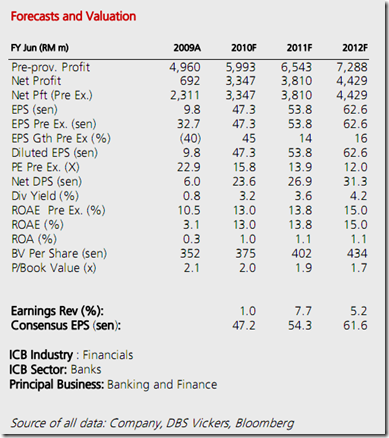