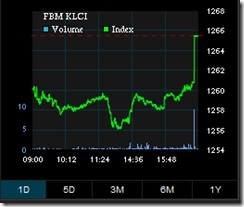 Mixed signals generated by the daily and weekly momentum and trend indicators suggests further sideways trading for the benchmark index this week.

On the other hand, note that previously more bearish technical indications have been neutralized, paving the way for a base building process which would hopefully be followed by a year-end recovery.  A more concerted window-dressing effort by local funds coupled with positive market breadth and resurgent buying momentum will be critical to promote follow-through gains.

As for the KLCI, immediate support is adjusted upwards to 1,260, the 50% Fibonacci Retracement (FR) of the upswing from the 1,233 low of 2 November to the 17 November high of 1,288.  This support is reinforced and matched by the important 50-day moving average support which had cushioned shallow profit-taking corrections since March.  Next stronger supports on an unlikely breakdown will be at 1,254, the 61.8%FR, and then the 30 November low of 1,248 acting as a critical pivot support.  On the upside, expect immediate resistance at 1,275, the 23.6%FR level, with 1,280 and then the 17 November pivot high of 1,288 as tougher hurdles.

Sector-wise, we expect banks to attract renewed investor interest on speculation of further consolidation given news over the weekend of Hong Leong Bank's interest in buying a substantial stake in EON Capital, the parent of EON Bank.  Elsewhere, defensive buying in gaming stocks should pick up steam with focus on MPHB, following talk of a potential re-listing of wholly-owned subsidiary Magnum Corporation.  Meantime, as stock prices of lower liners continue to deteriorate, bargain hunting should increase pace at cheaper levels, especially on stocks such as RCE Capital, Kurnia Asia, Notion VTEC and Carotech which are likely to attract more buying interest.Off Market DAYA 5.0m @ RM0.30
source : TAsecurities