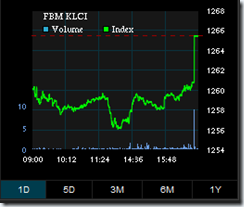 Bursa Malaysia shares extended consolidation last week, with most investors staying away ahead of the year-end holidays amid mild profit-taking on blue chips, while market players reduced commitments due to the progressively slower trading momentum.

Week-on-week, the FTSE Bursa Malaysia Kuala Lumpur Composite Index (FBM KLCI) lost 10.2 points, or 0.8% to settle at 1,260, with falls on Genting Bhd (-26sen), Maybank (-7sen), Axiata (-5sen) and MISC (-16sen) contributing to slightly more than half of the index’s losses. Daily average traded volume and value dwindled to 607mn shares worth RM828.3mn, compared with the 814.3mn shares and RM1.13bn average the previous week.

We are almost reaching the tail end of 2009 and there is no buzz about a year-end rally although a few economic indicators locally and abroad surprised on the upside. Malaysia’s Industrial Production Index (IPI), for instance, has reverted to a growth in last October after declining for a year, thanks to expansions in electricity and manufacturing sub-components. This improvement was in-line with the recovery seen in exports for October, which rose unexpectedly. China too surprised the market when its IPI rose 19.2% YoY and exports fell less than expected. Nonetheless, the republic is worried about an economic bubble now that it planned to slow new lending next year. Japan’s lower than expected 3Q09 GDP growth of 1.3% was a wet blanket but it quickly unveiled a 7.2tn yen (US$80bn) stimulus package to revive its waning economic recovery.

There is no scheduled announcement of any economic data or corporate highlights on the local scene this week to prop up the market. News flows in foreign countries and their market movements, especially in the US, are going to be the deciding factors for FBM KLCI’s direction this week. The US will release some of its forward indicators such as housing stats, building permits and leading indicators this week. Initial estimates are pointing towards further month-on-month expansion and the data are not expected to disappoint. The Federal Reserve will announce its rate decision on this Thursday, which is likely to be maintained based on what Ben Bernanke expressed to Senate Banking Committee on Dec 03.

In the absence of positive leads, the local market could consolidate further this week. Investors should regard it as a good opportunity to nibble for undervalued high beta plays and defensive stocks that have some growth prospects for a possible rally in first half next year.

Bank on Next Year’s Rally

The rally is underpinned by a double digit earnings growth, strong liquidity on the back of low interest rate environment that sustains interest in high yielding asset classes, Ringgit strengthening vis-à-vis the US dollar that will attract foreign capital, robust domestic demand and a recovery in CPO prices in the 1Q10. Malaysia’s current low foreign shareholding is a boon as Bursa Malaysia’s latest October trade statistics are already showing a reversal in trend with foreigners becoming net buyers for the month. Watch out for downside risks in the second half of next year, mainly caused by the unwinding of dollar carry trades and setbacks in government exit strategies.

Speculative interest in some counters linked to the Naza Group could become lively this week with the company planning to hold a press conference to elaborate on its plan with regards to development of a huge RM15bn project around Jalan Duta, Kuala Lumpur. While contractors and building material players will benefit from this huge project, worries about oversupply could affect share prices of other property counters that have heavy presence in the Klang Valley. It is a trading opportunity.