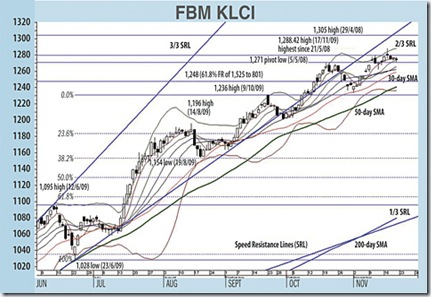 Optimism in the early part of last week on hopes the listing of Maxis will encourage more institutional participation was proven wrong, as profit-taking followed after they shifted holdings in other blue chips to this top-tier telco and rebalanced their portfolios ahead of the year-end.

The market is expected to deflate this week after the feel-good sentiment ahead of Maxis' listing and the rally in banking stocks drove the index to test the year's high of 1,288 last week. Optimism surrounding Maxis fizzled out the day after its listing as retailers and some funds locked in their profits. Retailers were content with their short-term gain of up to 16 per cent as the stock rose to a high of RM5.50.

Some rotational interest in Axiata was apparent as it is regarded as the only local telco stock that can give investors adequate exposure to foreign market with some growth appeal as Maxis and DiGi are perceived as dividend plays now in a matured domestic market.

There are no major domestic catalysts to drive the index this week unless some big corporations like Sime Darby can report better-than-expected earnings in the final leg of the third-quarter earnings reporting season that will end next Monday. However, no major surprises are expected. Even Bank Negara Malaysia is not expected surprise anyone in their policy meeting tomorrow. It is likely to leave the Overnight Policy Rate (OPR) unchanged as there are no inflationary pressures and the economy needs sustained monetary loosening for an extended period for it to chart growth. The potential floating of petrol prices at the pump next year will contribute to a higher Consumer Price Index but do not expect Bank Negara to adjust upwards the OPR until the second quarter or the second half of 2010. Any upward adjustment in the OPR will lead to higher base lending rates that will benefit the banking sector.

It is heartwarming to see a lower gross domestic product contraction of 1.2 per cent year-on-year for the third quarter 2009 period, against consensus expectation of 2 per cent. As external trade is still in the doldrums with exports contracting by 13.4 per cent and imports falling at a slightly lower rate, the need to sustain domestic demand is crucial to register a positive economic growth in fourth quarter 2009 and beyond. The accommodative monetary policy and fiscal expansion are likely to contribute to a positive growth of 2.5 per cent in the fourth quarter before gaining momentum to record a 2010 growth of at least 3.4 per cent.

Nonetheless, it appears that the market fully discounted the news of better-than-expected GDP growth as it had gotten wind of it from our premier a few weeks ago. As a healthy correction is vital for the benchmark index to continue its northbound journey next year, look to sell overbought blue-chip counters that had run ahead of their fundamentals while concentrating on buy opportunities in the small to mid-cap growth stocks.

Technical outlook
Shares on Bursa Malaysia ended higher last Monday led by banking stocks after a regional rally boosted by the Apec summit's endorsement of economic stimulus measures to sustain a global recovery. The market ended mixed the next day as profit-taking in banking stocks was offset by buying in core plantation stocks, but the broader market was negative due to keen profit-taking interest.

Profit-taking persisted for the next three trading days, as investors shifted funds from other blue chips to the newly relisted telco Maxis and rebalanced their portfolios ahead of the year-end. The profit-taking was also encouraged by weaker external markets, as concerns grew that the recent rally had outpaced or fully discounted the anticipated strong growth and earnings prospects for next year.

The FBM KLCI peaked at 1,288.42 early last Tuesday, the highest intra-day level charted since May 21 last year, before retreating to low of 1,270.74 in morning trade on Friday, hence contracting further to a 17.68-point trading range last week, against the 20.3-point trading range the previous week.

The daily slow stochastics indicator for the FBM KLCI has flashed a sell signal following last week's profit-taking correction, but the weekly indicator stayed flat at the highly overbought region. The 14-day Relative Strength Index (RSI) formed a bearish divergence against the index, while the 14-week RSI remained overbought with a reading of 73.99.

Meantime, the daily Moving Average Convergence Divergence (MACD) also flashed a sell signal, while the weekly MACD trigger line is poised to crossover for an imminent sell signal. The ADX line on the 14-day Directional Movement Index (DMI) trend indicator continued to deteriorate for a lower reading of 31.89 as of last Friday, while the +DI and -DI lines contracted further, suggesting more downward consolidation ahead.

Conclusion
Multiple sell signals from the daily slow stochastic, daily and weekly MACD and bearish divergence on the 14-day RSI on top of the persistently overbought 14-week RSI for the FBM KLCI have greatly increased downside risk for a more significant profit-taking correction this week. Moreover, with the beginning of the year-end school holidays likely to see a lot of market players taking their families out for well-deserved vacations, trading momentum should suffer as daily turnover dwindle below the one-billion-share mark.

As for the FBM KLCI, expect immediate downside cushion at 1,267, the 38.2 per cent Fibonacci Retarcement (FR) of the rally from the 1,233 pivot low of November 2 to last week's peak of 1,288. A confirmed breakdown on close below this level will see stronger retracement supports at 1,260 and 1,254, the respective 50 per cent FR and 61.8 per cent FR levels being tested. On the upside, expect immediate resistance at 1,280, with 1,288 as next resistance. Looking ahead, a breakout will see formidable resistance from 1,305, the April 29 2008 pivot high.
As such, chart wise, remain cautious on core banking stocks AMMB, CIMB, Maybank and Public Bank which stayed overbought despite last week's profit-taking dip. Look to take profits or sell trading positions on these banks, and switch to nibble gaming stocks Genting Bhd and Genting Malaysia as we anticipate investors will stay defensive until year-end. On lower liners, look to accumulate oil & gas related stocks such as Dialog, Kencana, SapuraCrest and Scomi Group with buy on dip calls given pending corporate exercises such as bonus issues and capital raising activities for future growth.

The subject expressed above is based purely on technical analysis and opinions of the writer. It is not a solicitation to buy or sell.